LIBRARY CORNER by Lac du Bonnet Regional Library for the week of June 27, 2022

C. J. Box continues the Joe Pickett series with Shadows Reel. Wyoming game warden Joe Pickett and his wife Marybeth make separate discoveries that put the Pickett family in a pair of killer’s crosshairs.
Quick Silver is new from Dean Koontz. A man is in pursuit of his strange past – mile by mile. Quinn Quicksilver was born a mystery. Compelled to drive out to the middle of nowhere, he finds a coin worth a lot of money. Now he is on the run for his life. 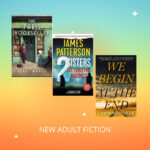 Kerri Maher has a new book The Paris Bookseller. Bookish young American Sylvia Beach opens Shakespeare and Company on a quiet street in Paris in 1919. The future of her beloved store is put to the test as Paris is plunged deeper into the Depression and many expatriate friends return to America. As she faces painful personal and financial crises, Sylvia must decide what Shakespeare and Company truly means to her.
2 Sisters Detective Agency by James Patterson is new to our collection. Attorney Rhonda Bird returns home after a long estrangement when she learns her father has died. There she makes two important discoveries: her father stopped being an accountant and had opened up a private detective agency, and she has a teenage half sister named Baby.
We Begin At the End by Chris Whitaker is a new mystery packed with unforgettable characters. Thirty years ago, a teenage Vincent King was sent to prison. But now, he’s served his sentence and is returning to his hometown. The hometown where his childhood best friend, Walk, is now the chief of police. The town where his childhood sweetheart, Star Radley, still lives. The same Star Radley whose sister he killed.

Stuart Woods continues the Stone Barrington series with a large print offering with Criminal Mischief. After a dangerous adventure has him traveling up and down the coast, Stone Barrington is looking forward to some down time at his Manhattan abode. But when an acquaintance alerts him to a plot being hatched across the city, he finds himself eager to pursue justice. After the mastermind behind it all proves more evasive than anyone was expecting, Stone sets out on an international chase to places he’s never gone before. With the help of old friends. Stone is determined to see the pursuit through to the end, even if it means going up against a foe more unpredictable than he has ever faced.
Also available from Stuart Woods is A Safe House. Stone Barrington is looking forward to some quiet time in New York City, until he is asked to transport precious, top-secret cargo across the Atlantic. Taking on the challenge, Stone flies off unaware of what-or who-he is bringing with him. But his plans to lie low are quickly spoiled when a dangerous dispatcher tracks down Stone and his tantalizing mystery guest, intent on payback-and silencing anyone who poses a threat.