LIBRARY CORNER by Lac du Bonnet Regional Library for the week of May 23, 2022 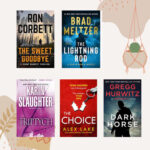 The Sweet Goodbye by Ron Corbett starts a new series. The most dangerous predator in the Maine wilderness walks on two feet—and it is Danny Barrett’s job to bring him down.

The Lightning Rod is second in the Zig & Nola series by Brad Meltzer. Archie Mint has a secret. He’s led a charmed life—he’s got a beautiful wife, two impressive kids, and a successful military career. But when he’s killed while trying to stop a robbery in his own home, his family is shattered—and then shocked when the other shoe drops. Mint’s been hiding criminal secrets none of them could have imagined.

Triptych by Karin Slaughter is crime fiction about the intertwined fates of three men.

The Choice by Alex Lake is a spine-chilling phycological crime thriller. Matt Westbrook only turned his back for a moment and suddenly his children are kidnapped and the ransom is his wife!

Dark Horse by Gregg Hurwitz is next in the Orphan X series. Evan Smoak: former off-the-books assassin – code name Orphan X. His world is divided into those who deserve his help and those who’ve brought his singular brand of justice upon themselves.

Tell the Wolves I’m Home by Carol Rifka Brunt. Two lonely people become the unlikeliest of friends and find that sometimes you don’t know you’ve lost someone until you’ve found them.

The Paper Palace is a new novel by Miranda Cowley Heller. Elle’s shocking betrayal leads her to a life-changing decision.

Malibu Rising is new to our circulation by Taylor Jenkins Reid. Celebrity culture takes centre stage as four famous siblings throw an epic party that ends with the family mansion burned to the ground.

Little Souls by Sandra Dallas is a gripping tale of sisterhood, loyalty, and secrets set in Denver amid America’s last deadly flu pandemic.